This product is mouse antibody recognizes SUMO-1 of human. The antibody immunoassay techniques such as: IP, WB.

SDS
Host Species
Mouse
Application
IP, WB
Immunogen
Recombinant peptide
Antibody Isotype
IgG1
Specificity
Human, Chicken, Mouse, Xenopus
Format
Liquid
Storage
Store at +4°C short term (1-2 weeks). Aliquot and store at -20°C long term. Avoid repeated freezethaw cycles.
Introduction
This gene encodes a protein that is a member of the SUMO (small ubiquitin-like modifier) protein family. It functions in a manner similar to ubiquitin in that it is bound to target proteins as part of a post-translational modification system. However, unlike ubiquitin which targets proteins for degradation, this protein is involved in a variety of cellular processes, such as nuclear transport, transcriptional regulation, apoptosis, and protein stability. Ubiquitin-like protein that can be covalently attached to proteins as a monomer or a lysine-linked polymer. Covalent attachment via an isopeptide bond to its substrates requires prior activation by the E1 complex SAE1-SAE2 and linkage to the E2 enzyme UBE2I, and can be promoted by E3 ligases such as PIAS1-4, RANBP2 or CBX4. This post-translational modification on lysine residues of proteins plays a crucial role in a number of cellular processes such as nuclear transport, DNA replication and repair, mitosis and signal transduction.
Alternative Name
SMT3C; SMT3H3; UBL1; PIC1; DAP1; GMP1; OFC10; SENP2
Entrez Gene ID
7341
UniProt ID
P63165
Ask a question We look forward to hearing from you.
0 reviews or Q&As 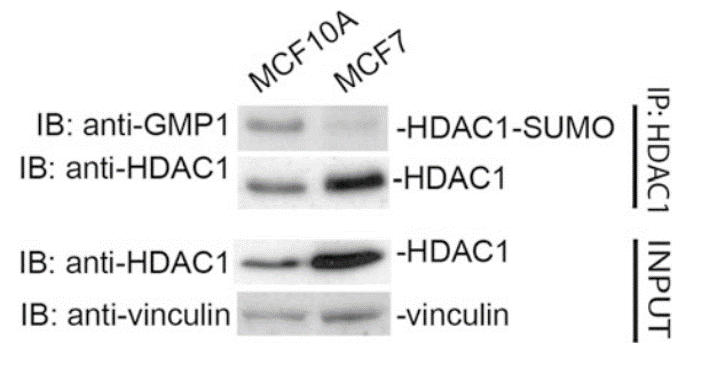